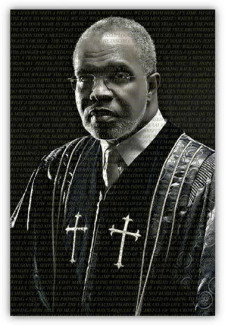 The essence of a Godly man is not only characterized by his glorification of God but also his love and devotion to his family. Reverend Daniel Sanders, September 13, 1952 – October 4, 2016, was a loving husband to Debra and a devoted father of five daughters; Danyelle, Tonia, Jamie (Nolan), Jennifer (Thomas) and Melinda (Robert).  He was a supportive father-in-law and a proud grandfather of; Morgan, Daniel Joel, Daniel Brantley, Ayden and his future granddaughter Danielle Louise.  He truly loved his family and was not delinquent in showing his devotion to them, whether by word or deed.

His love for the Lord was a constant in his life. He began his journey with God joining Juniper Level Missionary Baptist Church at an early age where he served as a junior deacon. Continuing his commitment to Christ, he served as Pastor of Pleasant Grove Church in Belhaven NC from 1979 – 1980 and later as the 12th Pastor of Springfield Baptist Church from June of 1980 until October 2016 when his earthly journey in service to God was elevated to answer a higher call of God.

Reverend Sanders was a humble man that never wished to be identified by his many accomplishments, which included a Bachelor of Science Degree in Accounting, a Degree in Theology from Shaw University and service to his country as a finance specialist in the U. S. Army.

He was known not only for his powerful deliverance of God’s word but for his singing ability as well. His passion for singing was evident. While singing with the gospel group, the Goldeneers, he was featured on their album, “Robed and Ready”, which included a song written by him entitled “Nobody but Jesus”.

Blessed with limitless energy, compassion and a deep love for God, his family and humanity, Reverend Sanders will long be remembered for his devotion to his church, dynamic preaching and unselfish service to the community at large which included an appointment by Governor Hunt to the NC Teacher’s Fellows Screening Committee and the Task Force Committee on School Violence. Additionally, he served on several countywide committees as appointed by the Wake County Commissioners and the Wake County Sherriff’s office and a past member of the Raleigh – Apex Branch of the NAACP Executive Board where he was recognized as Pastor of the Year in 2013.  Pastor Sanders implemented a forum for electoral candidates and ensured that Springfield was established as a voting site for registered voters in Wake County. A man of wisdom and great integrity, he stood his ground leading the charge when Springfield and its’ surrounding community was threatened by NCDOT and the Turnpike Authority’s “Red Route”.

Reverend Sanders was actively involved in the Baptist Association serving as: Moderator of the Wake Missionary Baptist Association (WMBA); Past President of the Baptist Training Union (now Congress of Christian Education) of the WMBA; President of the Ministers and Deacons Union (now The Union); Senior member of the Ministerial Council; Catechizer for the Ordination Council which examined and recommended ordination for many ministers throughout the Association; Clerk of the Association; He was the chief editor of the constitution and by-laws of the Wake Baptist Association( all of the recent edits and revisions were crafted under his leadership and guidance); He automated the records and financial books of the association; Instructor for the Pastors’ class in the Union; Organized several Spring Institutes for the Association; Strong supporter of the James Wertz Oratorical Contest (Local and State);Host of the annual outing for the Ushers Convention; Host of The Union; Member of the General Board of the General Baptist State Convention (GBSC); Past Vice President of the GBSC Baptist Training Union. In 2015, he was one of the first inductees into the WMBA Hall of Fame.

Recognized not only for his deliverance of powerful, soul inspiring sermons, Reverend Sanders was the recipient of many letters of recognition from Government Officials. Mayor Charles Meeker proclaimed, June 26, 2005, Pastor Daniel Sanders Day in acknowledgement of the accomplishments manifested in his life. In the same year, Secretary of State, Elaine Marshall issued him the “Capitol Citation” in tribute for twenty-five years of leadership and service at Springfield.  He received letters from former Governors: Beverly Perdue under whose governorship he was the recipient of the prestigious award, The Order of the Long Leaf Pine, on June 27, 2010; Jim Hunt; Michael Easley and Congressman Bob Etheridge to name a few. Reverend Sanders also received congratulatory letters from President Barack H. Obama for his dedicated years of pastoral service in 2010 and 2015.

The effect of the Reverend Sanders’ life has been far-reaching. Along with traveling extensively throughout the country rendering service, his powerful and motivating sermons could be witnessed through his radio, television and tape ministry. He was not influenced by the “new age” preaching methods but rather upheld the “old fashioned” teachings and never let other obligations interfere with his love for God, family and Springfield.

As a tremendously dedicated Pastor and a man with true vision, direction, and destiny, which could only come from the one who controls not only the present but also the future, he continued to build on the foundation established by his predecessors. Many are his pastoral accomplishments at Springfield, which include implementation of the “Babes in Christ” Class, the Male Chorus and the Children’s Department; Tuesday Night Bible Study classes resumed and Daytime Bible Study was established to meet the needs of our Seasoned Citizens and those members who worked at night. Reverend Sanders developed the “Vision Statement” to give inspiration, direction and clarity of purpose to the members of Springfield.  With the increasing growth of the congregation, he ordained over sixteen Deacons and trained over twenty Associate Ministers along with ordaining several Ministers, some of whom have gone on to Pastor at other churches. The property at 4309 Auburn-Knightdale Road, already in possession of the church, became home to a new edifice (now the Fellowship Hall) and was occupied on May 27, 1990 with the mortgage burning held on May 29, 1992. The church purchased a bus in 1994, which became known as the “Spirit of Springfield” and a van the following year. These two vehicles provided transportation for Reverend Sanders, the choirs and congregation to travel both in and out-of-state to spread the message of God through word and song. On April 10, 1995, 40.42 acres of land was purchased. Six years later construction began on a new edifice. On Sunday, May 19, 2002, Reverend Sanders led his flock into a new house of worship. Over the years to come, more Ministries were formed, choirs were combined, the congregation grew to over 2000 members and the Gospel was delivered with great power. On November 1, 2015, ground was broken for the new multi-purpose building. Upon completion, the building will be dedicated and named in honor of Reverend Sanders.

So much of the legacy of Reverend Daniel Sanders cannot be told with pen and paper. His deep reaching effect on the people that he came in contact with can only be felt in the heart but will often be heard in the expressions of both young and old when asked to comment on their relationship with him.  His charge to us, as true believers and followers of God’s word, is to “Stay Committed”, not to him but to God, which Pastor Sanders strived to instill in the people of God through the many, many lessons that he taught through his sermons.  Though we cannot fill the void or the shoes, of such a deeply loved man of God, we can pass on the legacy through celebrating his life, sharing his teachings with others, continuing to press onward and never forgetting the vision that he left for us to build upon. The life, the legacy and his uncompromising love for God, family and fellowman speaks for him… Pass it on. 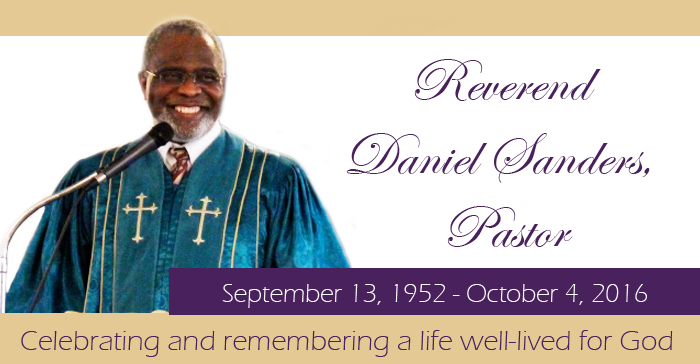 The video of the last four sermons preached by Pastor Sanders are below. (Click the sermon title to access the associated video.)